Some unusual wildflowers to look for

Now that the summer heat has started some of the more interesting flowers are showing up on Green Mountain.  We've been able to plant a couple of them in our garden, but wildflowers are notoriously difficult to get started.  For all the seeds they put out there aren't that many plants, and it seems lots of them like to find nooks between rocks or right up against the sidewalk when they do sprout.

The first one we'll look at is Prairie Coneflower (Ratibida columnifera).  It's fairly common on the mountain and can be found in nurseries.  It's known as Mexican Hat in garden shops.  It's in the aster family so it has the bright yellow ray flowers (which look like individual petals) around the outside.and a tall cone of disk flowers in the middle.  They may have some dark red mixed in with the yellow, but most of the natives are only gold. Another summer favorite is Purple Prairie Clover (Dalea purpurea).  It has a similar form to the Coneflower with the long tall cone of ray flowers, but this one's not an aster, but is part of the pea family. Ringing the cone are a row of tiny purple flowers.  The first picture shows the whole plant with some golden asters mixed in.  The second is a closeup showing all the individual flowers with their yellow pollen-bearing anthers.  There is also a White Prairie Clover (Dalea candida), which is blooming in abundance in a few areas on the mountain.

While I was running on the Summit Loop Trail Saturday I found another flower that's unusual for Green Mountain.  This one is Miners Candle (Oreocarya virgata).  It's fairly common in the mountains, but I've only seen it on GM a couple times.  It's in the Borage family which means it has lots of hairs all over the stems.  If you brush against it your arms or legs against it you might feel the itch that come from the hairs. 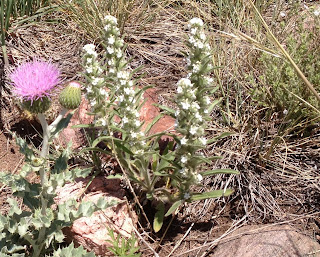 We'll be heading to Crested Butte for a few days over the 4th.  Should be some great wildflowers up there so I may post a few pictures from up there next weekend.  Enjoy the holiday!